An Acadian family in conversation…

One of my on-going projects is to research and write about an important aspect of the Acadian and French-Canadian culture in the Madawaska region:  their mills. The result will be a book titled “Moulins du Madawaska” (Mills of Madawaska) which will be published in 2019. Here is the Introduction to the book.

After their eviction in 1755 from Acadia, the Acadians migrated to the Madawaska territory in 1785 in search of a new home. Acadia had been their homeland since 1604. Among those settlers were the millwrights and millers who would respectively build and operate the mills that produced the construction lumber, ground their corn, wheat, oats and buckwheat and carded their wool. We will go into their 200-year story and show how some of the mill families helped each other by passing on the technology of building and running mills in the St-John River valley.
The history of ‘Moulins du Madawaska’ (Mills of Madawaska) focuses on a few ‘Meunier’ settlers , who influenced the direction of the milling industry in the St-John Valley. We begin with an Acadian, Firmin Thibodeau and his father Olivier, who with François Violette, Joseph Theriault and other Acadians built the first mills in the St John valley around 1790. Later, the two American brothers, Nathan and John Baker built the first sawmill in 1817 on the Méruimticook brook , 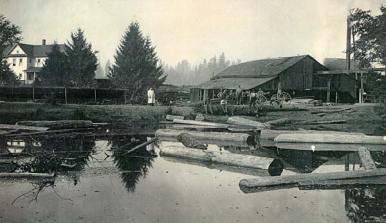 present-day Baker Brook. We will progress our milling history through some of the key mills in the valley on both sides of the river including Pierre Plourde’s saw mill and later his grist mill in St Jacques, George Corriveau’s grist mill in Coron Brook and Upper Frenchville, Benoni and Regis Thériault’s saw mill in St Basile, Savage in Fort Kent, Bob Connors in Connors, Don Fraser in Baker Brook, Edmundston and Madawaska. We will conclude with an-other Acadian, my great-grand-father Joseph Theriault whose modest family mill in Baker Brook eventually morphed into the giant Irving commercial mill complex today at that same location in Baker-Brook. 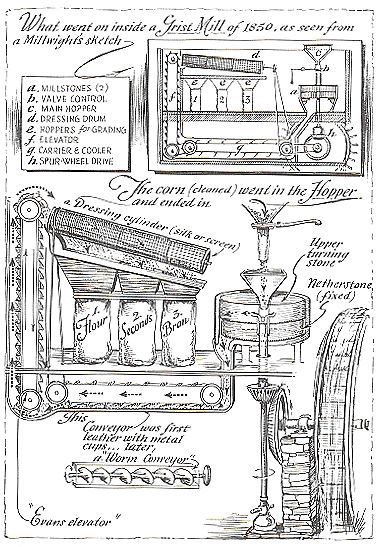 Eric Sloane illustration of a ‘grist mill’ or ‘flour mill’ as they are called in Madawaska.

Our focus in ‘Moulins du Madawaska’ is on the Acadian and French-Canadian mill families. So, we will examine Joseph’s earlier experience in St Jacques as a foster child and mill apprentice and the story of his grand-uncle Pierre Plourde who was the first to introduce milling to Saint Jacques around 1845. After some important improvements to the mill works by Pierre’s son-in-law, David Rousseau, the operation of the mill was passed on to Pierre’s grandsons, Philias Morneault and Charles Morneault in the hamlet of Moulin Morneault in Saint Jacques.

We include a survey of some two hundred mills (most located with GPS coordinates) that were built on both sides of the St John River from Connors to Grand Falls on the Canadian side and from St Francis to Van Buren on the American side.  The survey identifies the original builder and its operators which continue in a chronological history. The location, including geographic coordinates, along with a description of the mill is included.

t is an interesting turn of events that Baker Brook saw the early days of the milling industry in the region with Nathan Baker’s mill, who later benefited from Don Fraser’s innovative and entrepreneurial strategy with two Fraser mills, and later yet, the Theriault Mill which today is the J.D. Irving Scierie de Baker Brook, one of the largest and most productive commercial lumber mills in the province of New Brunswick.

We made a special effort to give this book its bilingual personality. While the format is a little more complicated, it reflects the bilingual culture of our Theriault family and helps us ‘brush up’ on the ‘other’ language.

One more note on our convention:  to help our reader know the exact locations of the places that we discuss in this book, we include the geographic coordinates of important locations in footnotes. To find a location, simply copy the coordinates into the address field of an Internet map. Finally, for the reader’s convenience, we include all maps in the Table of Contents.     J.R.T.

Click on our logo above to learn about our family... our history, our genealogy, our music, our cooking, our stories, our genetics...

FROM RIMOUSKI, QUÉBEC... Albert Thériault at center with his two sons, Paul at far left and Gilles at far right. Standing next to Paul is his son, Jean-François of the RCMP. Albert Samuel is standing next to his father, Gilles who is our delegate for the "Vital & Madeleine Thériault" Great-Branch. (Click to enlarge)

Belle Isle Current Events For Our Delegates From our Delegates On the Bayou Organization Update Our History Shores of Nova Scotia: More Stories Thought You Might Like This Uncategorized

Welcome to the Terriot family blog. Here, you will find our stories, our current events and our hopes and plans for the future. Feel free to give us your thoughts and comments. We would love to hear from you!

From our founding in 1999, we decided to be an organization that would be inclusive of all Terriots regardless of the spelling of their family name or of their native language. So, here, we address all descendants of Jehan and Perrine and we try to express ourselves both in English and in French. While we hope that our French is as good as our English, we know that we do not always succeed. So, we hope that reading our French is not too painful but please know that we take the time and trouble to translate all of our English material to French because we want to be inclusive. We trust that you will understand.

So, we ask that if you see that our language could be improved, please let us know by sending us an E-MAIL directly. We would be immensely thankful for any voluntary effort to improve our translations.

SO YOU HAVE NEWS?

If you have any news, send it to us and tell us that it is for "La Jaseuse". We'll be glad to publish it. Or, if you are a Delegate in our organization and you would prefer submitting the article yourself to our Blog, let us know and we will create an account for you as an author for the Blog. We will take a minute or two to explain to you how to post an article to the blog yourself.